I’m not going to say I despise the hustle of Nicki but I watched her Grammy performance of her latest single, “Roman Holiday”, from this past Sunday and couldn’t help but shake my head. Is it just me or has being mainstream sucked the “Onika” out of Nicki? I say yes. Her music was a lot more raw in her beginning hustle but the bigger she got, the more animated she’s become. Calm down Nicki stans, I’m not bashing the woman. Her split personalties and various characters are a bit much for me.

I’m not going to lie, I’ve sung to a few of her singles since she’s been under Young Money. But, that Grammy performance popped the cherry off her cupcake. I’m sure she had her wild reasons for wanting to go with a performance that plagiarized the Catholic church and stirred up even more controversy about “Illuminati”. As I watched it, it seemed like a performance you would expect for Kanye West to do. Something that reminded me of his, “Power” video.

For starters, she walked the red carpet with a Pope impersonator while she wore some Little Red Riding Hood get-up. If Lady Gaga were to have dressed like that, then it might have been less bashed but her style is crazy with a hint of McQueen so it fails and still passes.*loud laugh*. Hell no, Nicki, hell no. lol. Did I expect Nicki to dress crazy? Yes. Did I expect some crazy performance? Yes. Did I expect what I saw? No way. I’m sure many of the viewers did not either.

During her performance, Nicki was at a confessional yelling at the priest then the exorcism she enacted onscreen was funny but still like, what the hell? Not sure about you all but I don’t think Nicki thought about how her performance would cause a media frenzy with the religious community. She’s an artist and does what she wants but after that show, the Catholic League had much to say. 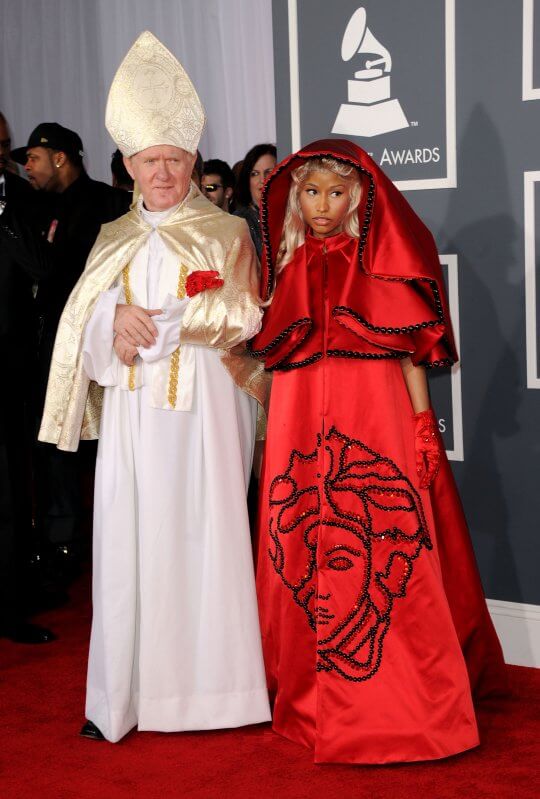 Catholic League president Bill Donohue states, “The most vulgar part was the sexual statement that showed a scantily clad female dancer stretching backwards while an altar boy knelt between her legs in prayer.” None of this was by accident, and all of it was approved by The Recording Academy, which puts on the Grammys. Whether Minaj is possessed is surely an open question, but what is not in doubt is the irresponsibility of The Recording Academy. Never would they allow an artist to insult Judaism or Islam.

My! Catholics can get gansta, lol. I follow Nicki on Twitter and she did throw a few comments defending herself in her own way. Tweeting Monday, “Were they offended by ‘the devil inside??? Shut-up & watch the movie b**ch!“. Of course, she had much more to say after that via Twitter but feel free to check those out if you want to be nosey. Overall, the performance was not great. The past few shows I’ve caught of her have been less than perfect. She also didn’t win anything that night. I hate when such great talent goes mainstream and the real talent that got them there deteriorates before our eyes. If you know anything about Onika before she became “Nicki” ad her many alter egos, you see what I’m saying for sure.

What are your thoughts on this years’ Grammy performances?