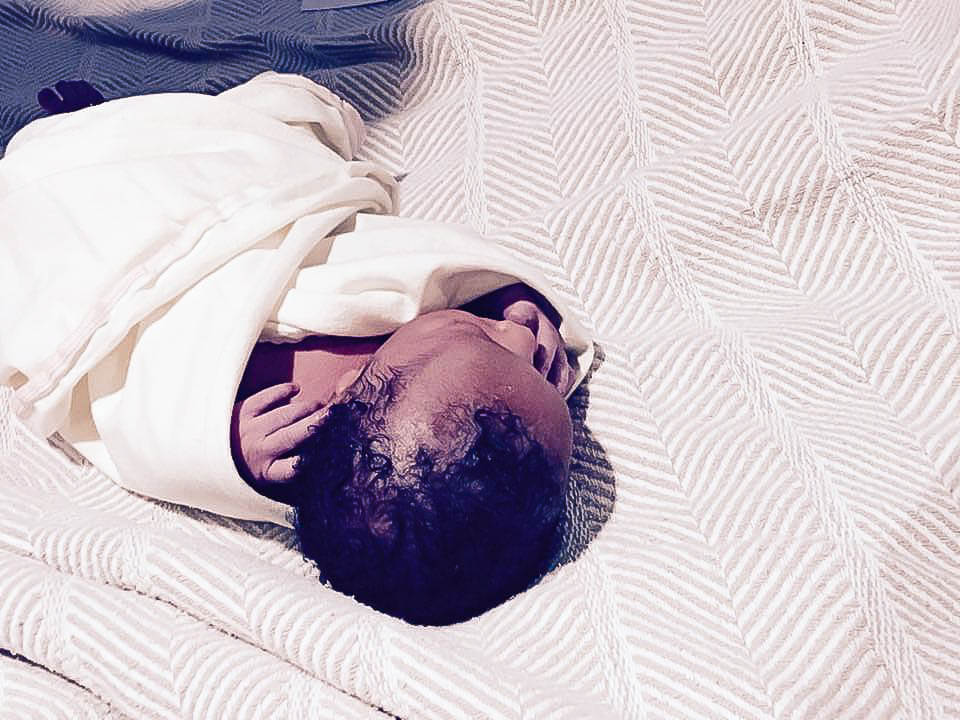 It’s been 3 months since I gave birth. As I’m nearing the end of the dreaded 4th trimester, I wanted to share this experience as one I will never forget. I gave birth to a lovely baby girl on September 6th at the Atlanta Birth Center – hello full moon baby! There are so many things I remember that it tops my first birthing experience in regards to it being a lot quicker and seamlessly easier to go through.

I had been experiencing a lot of lower right hip pain. When you have a toddler that wants to always play, pull you up and down the stairs, and be carried close in your arms, you definitely feel it. Getting a prenatal massage helped me a bit. I didn’t complain much because I wanted to make sure he felt as loved as possible. It being our last few days together with just he and I was bittersweet.

During this pregnancy, there were symptoms I had that I didn’t have with my first born. From nausea to constipation to the hip pain. I knew she was close to arriving as my belly continued to feel as though it wanted to live right between my legs. Not to mention the Braxton-Hicks contractions that began to come more throughout the day.

The day i knew

It was a long morning. I kept waking up on and off, tossing and turning due to what I thought were just more random BH contractions. Finally, a little after 3AM, I woke up and rushed to the bathroom feeling as though I had to (explicit). lol – I was feeling constipated. Ugh! I attempted to go back to bed but those contractions kept coming and making it slightly uncomfortable to rest.

For the next few hours, I was up pacing back and forth, up and down the stairs trying to allow my body to do what it needed to. I still just thought “oh, it’s just fake contractions, it’ll pass.” Around 5AM, I started timing them. Then comes 6AM and by then, they were beginning to come back to back. Since I wanted to birth naturally, I made use of breathing techniques, movement, and my beloved birthing ball to get me through the contractions. There was no pain, just what felt like intense period cramps that I knew wouldn’t kill me.

Once they started to time 3-5 minutes apart, I gave bae a call and basically said, “sooo, I think today is the day.” He went to rent a bigger car while I continued to breathe, bounce, and swirl through the feels. I also called my midwife to let her know what was going on and she recommended a hot shower and if possible, rest. I knew rest was not going to happen. My son woke up and while laboring, I went about making sure he was fed, started packing my bag, and prepped my shower. I ended up in my bedroom, on all fours breathing and vocalizing moans through several contractions coming 2-3 minutes apart.

Once daddy arrived, he went to help finish packing as I made my way to the shower. The shower was great. Things were definitely picking up because I was now moaning more than breathing through at this stage. He helped me out of the shower and we were getting ready to make a less than 2 hour drive to Atlanta. While he filled the car, I was trying to remember the important stuff. I had about 4-6 contractions I had to stop for as I made it from my bedroom to the staircase to the living room couch.

It was around 11ish when we left. I was on my knees, laboring in the back of the car while my toddler paid me no mind. The nerve. My midwife called maybe 3 times during the ride to make sure I was okay and getting close. I was a champ, knocking out those contractions like it was nothing. I was also pretty sure I had dilated to 8-9 centimeters. We arrived at the birth center close to 1PM. The midwives were outside waiting for me and were like, “you go girl! Laboring like this.” 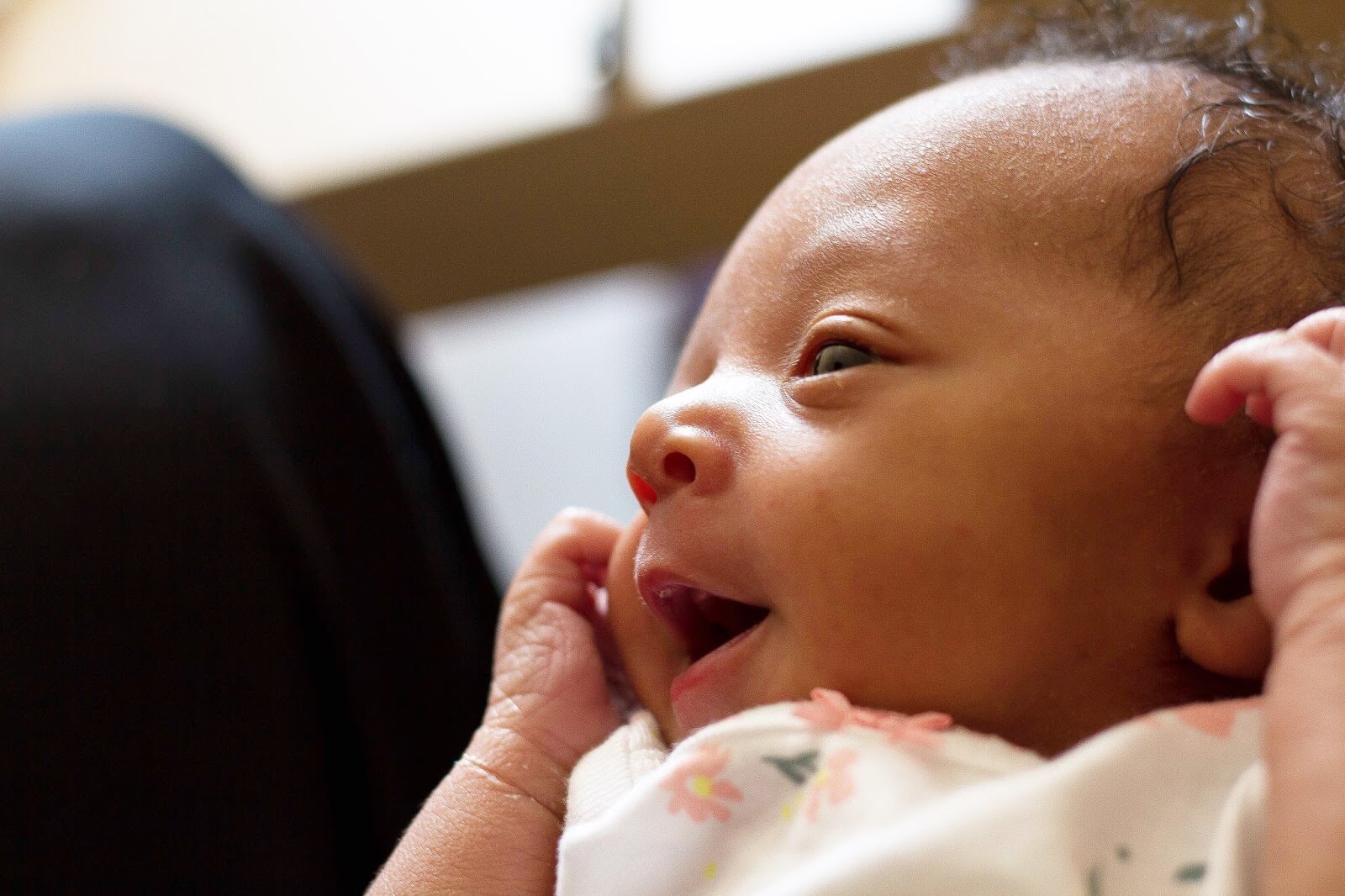 After arriving, I was triaged. I was already at 9 centimeters. Contractions kept coming as one of the midwives tried checking me out and getting me squared away. I was suppose to be treated with antibiotics for BStrep but baby girl said hell to the no, she was coming and coming fast. I got on the bed, on all fours, of course and started to push. LET ME TELL YA… THE “RING OF FIRE” WAS NOT WHAT I EXPECTED. It didn’t feel like agony or anything. Just a short period of time where I told my unborn kid hurry it up already.

After her head was freed, the rest was just smooth sailing then she slid right on out – lol. Thus my little one was finally here… 10 days early and all. According to Western Astrology, I have a Virgo baby. According to the more accurate 13 Astrology, she’s a fierce Leo. She literally arrived 20 minutes after we made it to the birthing center. That was fast. I also kept my placenta.

We all were able to relax afterwards. Since I was positive for BStrep, I was given a shot in the thigh after delivery and for the next few hours, we were both checked on every few hours. Delivering in a birth center has its perks. I was able to leave that night/super early morning once some paperwork and what not was taken care of.

Overall, this experience was definitely not what I expected. When most people hear that you plan to birth unmedicated, they look at you crazy and give all kinds of scare tactics. The nurses I had during my first birthing experience definitely laughed at me for even thinking that. I was glad to have the support and awesome midwife staff that I did this go around. Everyone’s pain threshold is different i guess. I’d definitely do it all over again, changing nothing. 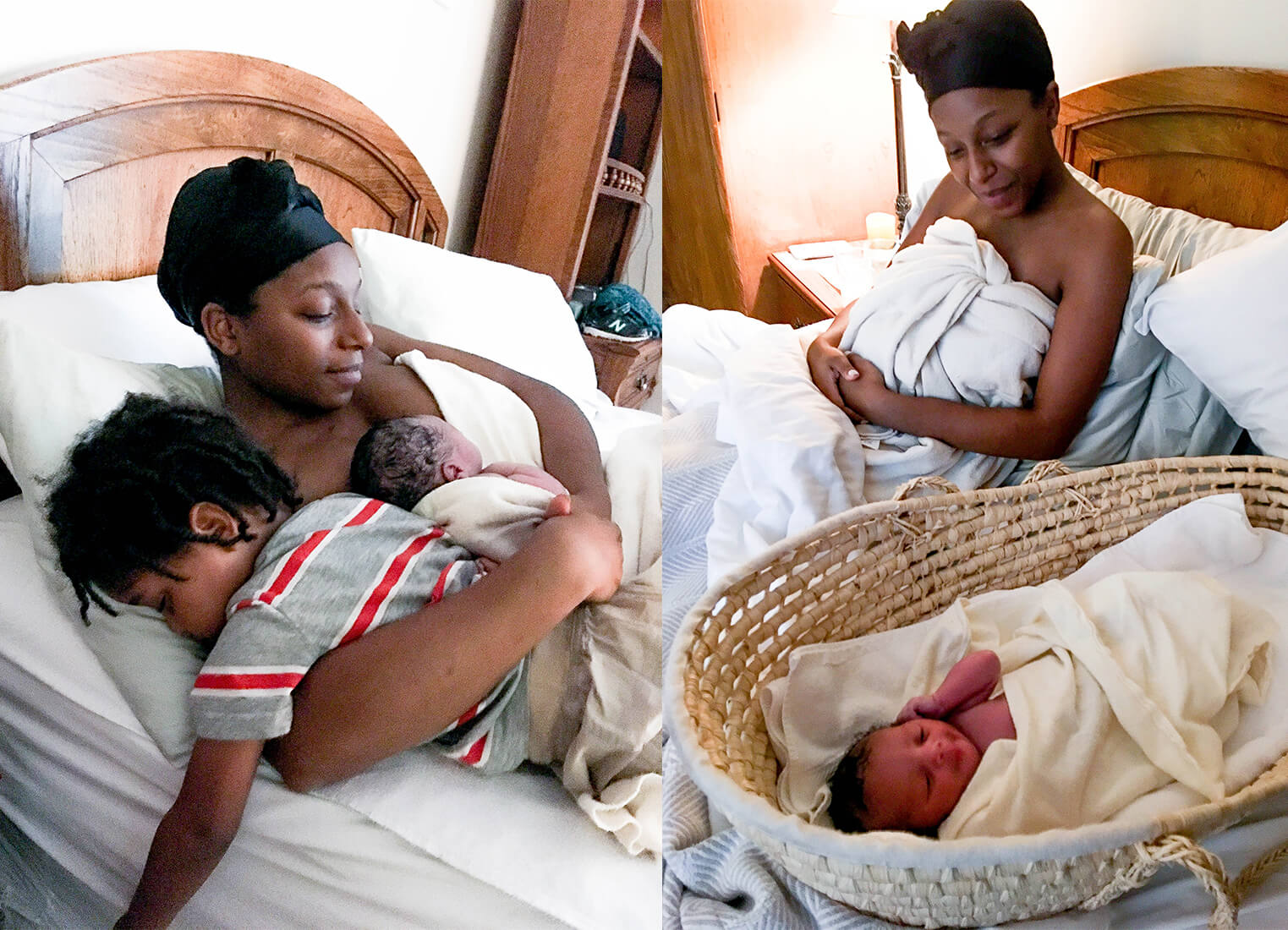 My toddler decided to fall asleep in my arms while I tried to nurse, He had a long morning. // Still taking it all in. 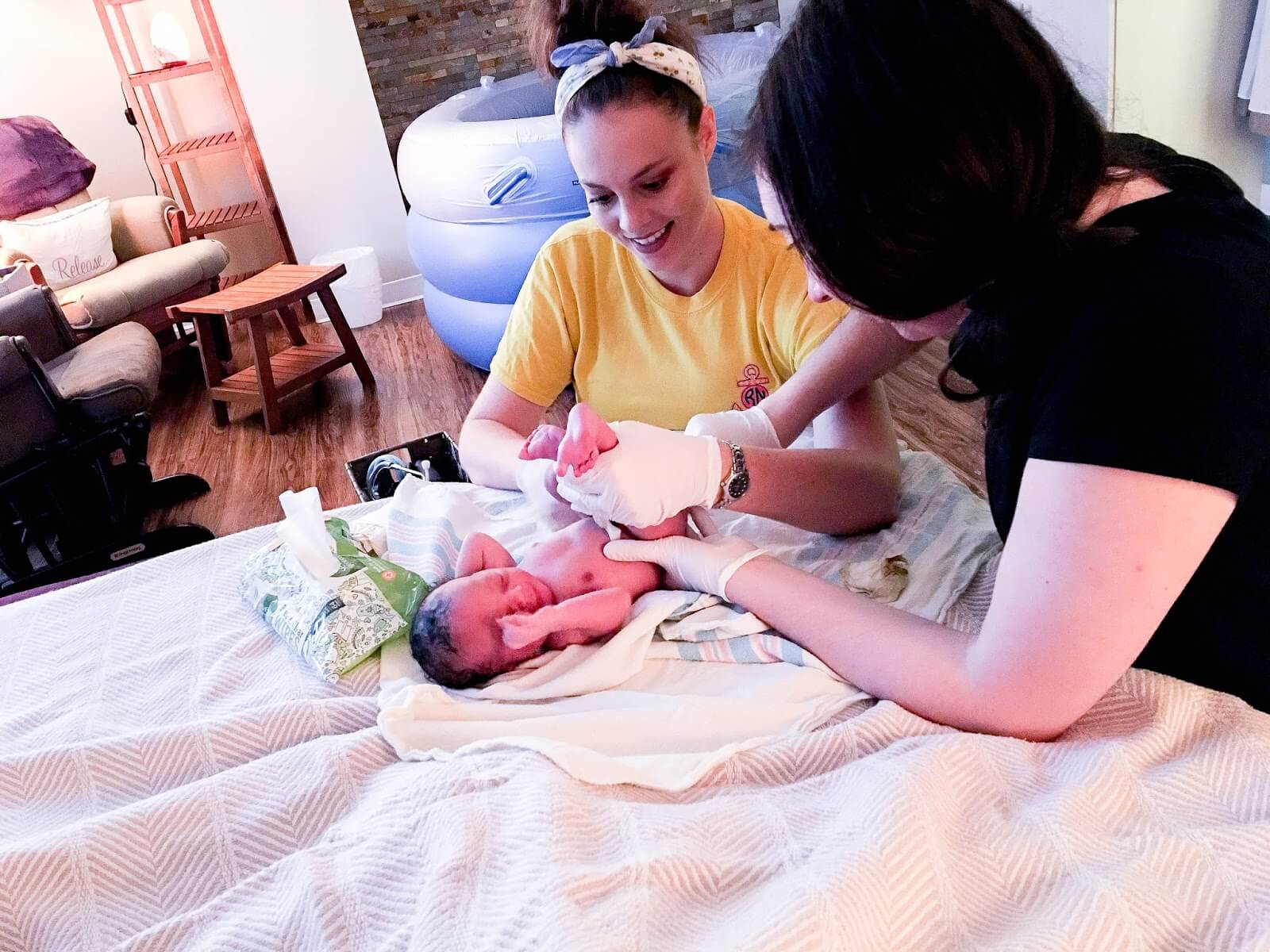 After baby decided to poop on me (hooray initiation, lol) – the midwife assistants gave her first clean-up. 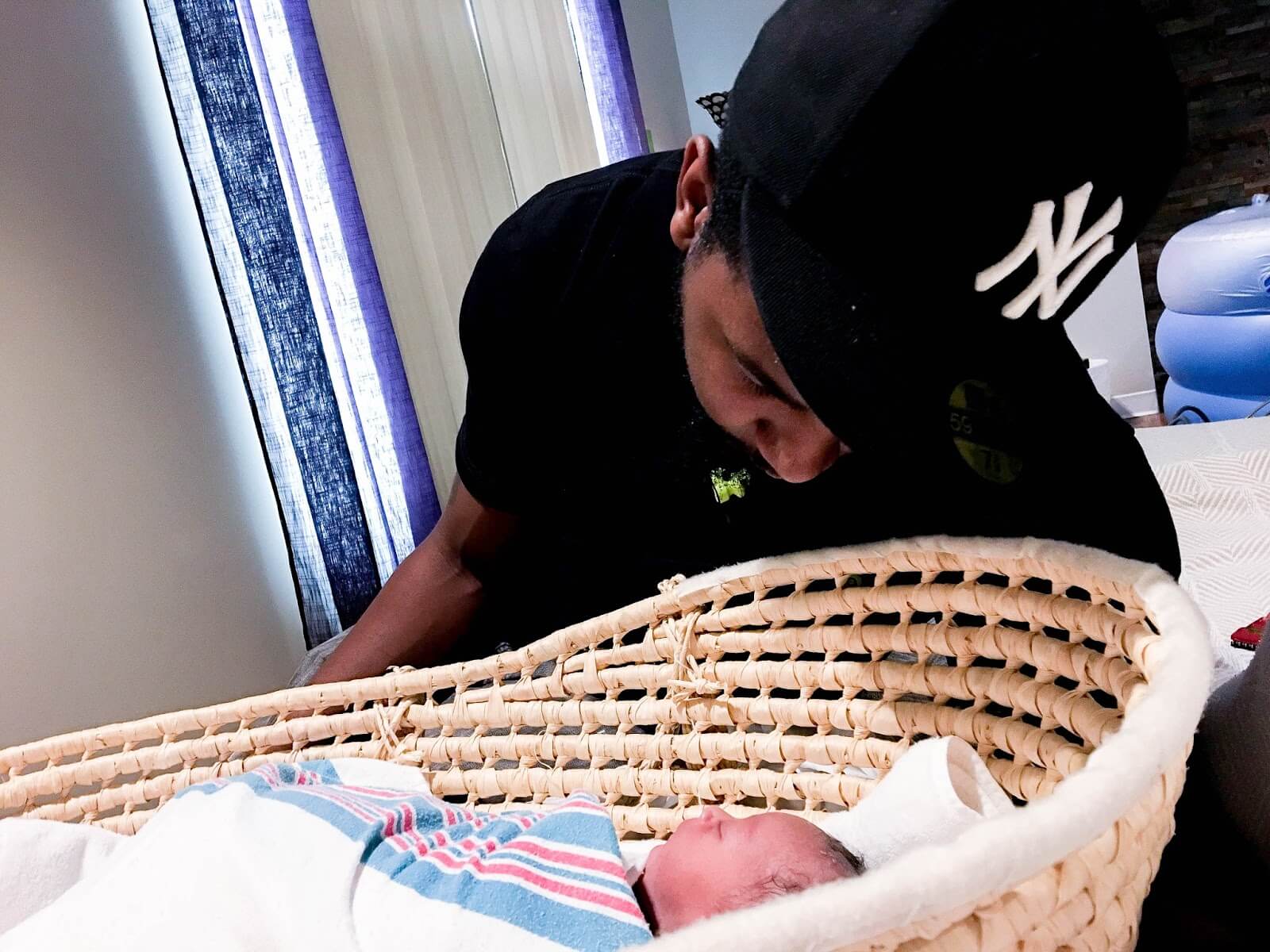 Daddy with his baby girl. First born so he was basking in this  new reality.

I’ve experienced both sides of birthing – medicated and not and doing so naturally for me, was pretty empowering. If you want to learn of my experience with the Atlanta Birth Center, I’ll be sure to share along with the process of becoming a patient there. I’ll also share what I did with my placenta.

What was your birthing experience(s) like? How were they different and are you team epidural or nah?